Surprise! (not). Townsend & Osienski are either oblivious or simply don't care about bike/ped access in their districts, or they would've been on top of this. Cross-posted from 1st State Bikes.

According to the East Coast Greenway (ECG) website greenway.org: The East Coast Greenway is a walking and biking route stretching 3,000 miles from Maine to Florida, connecting our nation’s most populated corridor. The East Coast Greenway is designed to transform the 15 states and 450 communities it connects through active and healthy lifestyles, sustainable transportation, community engagement, climate resilience, tourism, and more. The Greenway offers a safe place for bicyclists, walkers, runners, and more — of all ages and abilities — to commute, exercise, and visit new destinations. 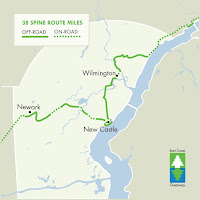 For Delaware's portion of the ECG: Enjoy the charming historic city of New Castle before continuing on the New Castle Riverfront Greenway along the Delaware River and heading westward to Newark, starting out on the Penn Farm Trail. The route incorporates a mix of side paths and roads to Newark, a small college town near the Maryland border where travelers will find themselves on the James F. Hall Trail before hitting the road again to the Maryland border.

There are numerous infrastructure and safety issues with the East Coast Greenway (ECG) in Delaware. Among them a section of shared use path (SUP) along Route 4 in Ogletown, where it crosses Augusta Drive to a 1 block section of shared Route 4 frontage street. This crossing is impeded by a raised N-S center median and there is no marked crossing through it. Crossing here is taking your life in your hands, with high speed traffic blindly turning onto Augusta exactly where ECG users attempt to cross. 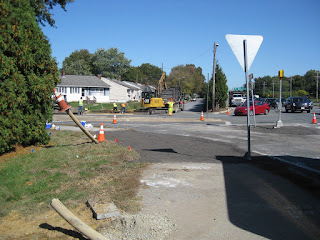 Very recently, this intersection was marked out for a traffic signal upgrade (photo left). In contacting DelDOT, it turns out that other features are being replaced as well, including pedestrian refuge islands and corner curb ramps. An existing pedestrian crosswalk across Route 4 to the "Shops at Augusta" (a small strip mall) will also be refreshed, but DelDOT will not be adding a crossing of Augusta to maintain ECG continuity.

Why isn't the ECG part of this upgrade? Even leveling the median for an unmarked at-grade crossing would be of help, as bicyclists are likely to circumvent around nearer to the lanes of Route 4. We wrote to DelDOT to inquire, and learned that none of this would be considered. In their words, "this signal rebuild has a limited scope and would not be able to address the geometric issues regarding the installation of a new crossing on SB Augusta Drive. However, as you requested we can add the R10-15 (turning vehicles yield to pedestrians sign) on the right side of SB Augusta Drive. It will be added at the end of the construction. In addition, we will forward your request for this intersection to DelDOT Project Development or the PAR program for further investigation or consideration in future projects" and "it would have doubled the scope of the project in both time and cost".

Adding a R10-15 on southbound Augusta is hardly solace for what should have been. This was a big pathways opportunity missed that could and should have earned the scope of this signal project. Minus any fix -- even a simple median leveling as suggested -- Augusta will now remain an impediment, as an unmarked and unsafe crossing in the ECG for years to come. It will still require stepping over or biking around a median in an uncontrolled manner (YouTube video). Meanwhile, there are plenty of examples of crosswalks added in similar rehab projects around Delaware one could point to. And, It has been understood for a decade now that Complete Streets improvements should be considered via reconstruction & rehab projects if at all possible -- even if additional funds might be needed. The ECG right of way should be of no exception. 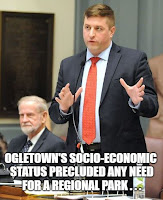 Par for the course. Just like the loss of the Orphanage Property as a park and pathways system (the region's last chance), privilege does indeed matter. Ogletown-S. Newark is 'undeserving' of these amenities based largely on socio-economic status. Other regions of higher rank and privilege fair much better in Delaware when it comes to multi-modal and community investment. Think: would it be the same outcome if this involved the Delaware Greenway in North Wilmington?

For the record: As we have seen over and over again, it was just another failure on the part of oversight orgs such as Bike Delaware, Wilmapco, DE Greenways, and area Legislators that a critical greenways/pathways improvement opportunity came and went with nary a peep. If they weren't made aware, perhaps DelDOT lacks the mechanism to reach out when a rehab or reconstruction project impacts a SUP pathway system like the ECG? Each of these org's missions emphasizes the need for multi-modal connectivity and networks that facilitate safe bicycling and walking. Bike Delaware in particular has a dismal track record in this regard.

Above: Google Streetview. East Coast Greenway 8' wide SUP is seen coming down from the above left straddling the Route 4 shoulder/bike lane to the side street intersection of Augusta Drive. A narrow sidewalk continues north on Augusta but there lacks any safe crossing of Augusta to continue east bound on the ECG (or vice versa).
Posted by Frank Warnock at 10:21 AM No comments: