With the stroke of a pen, 2 of Delaware's most corrupt legislators ever -- Senator Bryan Townsend and Rep Edward Osienski --destroyed the legacy of former Governor Russel Peterson (R) with HB-190. For those who don't know, Peterson was one of the greatest environmentalists to ever serve in public office, not just in Delaware but the U.S. as a whole. And that's one thing. It's quite another that the pair did this knowing full well the environmental implications, and in the big picture, the dire threat to species survival (including our own) -- both locally and globally:


The only thing more shocking is that Senator Townsend has a 2nd child on the way. With the science more clear than ever, what kind of future does he wish upon them? He had a golden opportunity to make a huge difference right at home -- for a bargain -- and leave a legacy not only for himself, but for his kids and everyone in his District 11. He could have been a champion for those who fought for several years to save the Orphanage Property's fields, forests and wetlands for a regional park. He could have made a bold statement about saving biodiversity while building a quality of life for Ogletown residents. BUT, profits and paybacks to his campaign donors were more important to him, so these hopes never even stood a chance at happening. Because of that, this webpage will serve as a reminder to future generations just who was responsible for their demise, first and foremost, the highest ranking and most influential legislator of them all: Bryan Townsend (D) District 11.
Posted by Frank Warnock at 4:57 PM No comments:

The lies of Senator Townsend and Rep Osienski 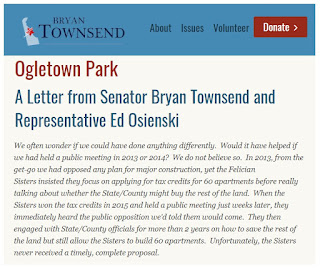 By Angela Connolly | That Senator Townsend and Rep Osienski are pathological liars couldn't be more apparent than their assertion that 2 additional years of advocacy -- from the time that developing the Orphanage Property was first conceived -- would have made zero difference in the outcome. Nothing could be farther from the truth. This sham was perpetrated by both of these State legislators who are responsible for this reckless travesty of justice. It was their defacto response after Councilwoman Diller leaked the news of the Chestnut Hill "Preserve" to citizens and Advocates in 2015, a full two years after the legislators first learned the threat of development. In the spirit of fairness and that "both sides are presented", we are including the relevant snippets from their pages. For the record, had any of these legislators brought the news of impending Orphanage Property development to their constituents, the press, and/or enlisted the help of Advocates in 2013, we would instead be in the planning stages of Ogletown Regional Park.

Any one, two or all three could have stood up to the Felician Sisters and insisted "you are not doing this to our constituents!" and demanded that meetings be arranged and that the seeds of a County and/or State acquisition be planted. It comes first and foremost with their job -- known in the field as representation, democracy and "the needs of the many outweigh the needs (or profits) for the few". These are concepts that Townsend, Osienski and Diller have absolutely no clue about, and never will.

Even non-critical lands of less consequence have been acquired by Govt agencies or Legislative bodies under much more strenuous circumstances than Townsend and Osienski describe. But there are hundreds, if not thousands of examples on-line and across the U.S. These pitiful excuses that they posted on their pages are a foul, repugnant reminder that Delaware is the 4th most corrupt State in the U.S., measured by transparency and accountability (lack thereof).

In summary,"legislators" Townsend, Osienski and Diller are just a few of the self-serving wretches in Delaware Govt that make life-changing decisions for the rest of us, while their #1 fundamental uno priority is to enrich themselves and their cohorts. Townsend in particular is recognized more and more as a foul, brown-nosing corporatist kiss-ass, who's scratching and clawing his way to the top of the political slag heap. Few doubt that he will win the Governor's Mansion or a seat in U.S. Congress. Ultimately, they are all enablers, bidders, and paid shills of the wealthy corporatist elite that fund their campaigns and pass the fat envelopes around. This could not be more apparent with the loss of the Orphanage Property, and an entire region's last hope for it's own park and form of place-making.

Posted by Frank Warnock at 12:52 PM No comments: