Privilege Has Its Rewards

Just the latest project for PEOPLE and quality of life happening in Newark proper, largely pioneered by State Legislators and Officials: 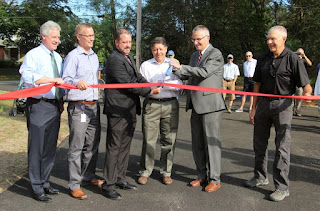 NEW PATH LINKS FAIRFIELD CREST TO POMEROY TRAIL
“This was our little haven. This was our little secret. Nobody else knew about this,” Garvin recalled. “Now, we have thousands and thousands of people who are going to take advantage of it, and it is an incredible thing for the city of Newark, New Castle County and the state of Delaware.”

Improving the trail has long been a priority for residents of Fairfield, Fairfield Crest and surrounding neighborhoods, as well as the cycling community.

“This creates a really nice connection to our downtown to help promote alternative modes of transportation, riding your bike, walking, improving your health, getting into nature. All these things are really important for our quality of life and reasons why people would want to come to Newark and live and work here.”

State Rep. Paul Baumbach said the trail is a long time coming. “The connection makes all the difference here,” he said. “This connects us, the community, to the university, to the state park, to the city parks. It finishes these pieces that are so important.”

Council approves additional funds for controversial bike bridge
Last estimated at $1.75 million, the project’s cost is now expected to surpass $2 million, though the exact amount won’t be known until the project goes out for bid, according to Newark Parks and Recreation Director Joe Spadafino.

Curtis Mill Park set to open Oct. 17
The park will include a plaza, a meadow, landscaping and a 12-to-15 car parking lot. Workers salvaged a number of bricks from the smokestack that once stood on the property and will use them in the construction of a plaza area that will contain kiosks with historical information and photographs of the former paper mill. 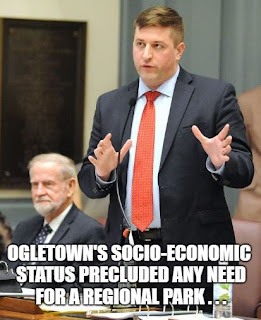 Too bad that Ogletown-S. Newark will never see these kinds of amenities. Living in this grossly disenfranchised region of New Castle County among the "unwashed" as viewed by Senator Townsend, Rep Osienski and NCC's Matt Meyer and Elisa Diller, "quality of life" doesn't stand a chance. For these four -- all Democrats -- a Wawa or Royal Farms with 12 gas pump islands is "place-making" and building communities.

View all articles in this series
Posted by Frank Warnock at 5:58 PM