Allentown goes for regional park on environmental and economic benefits

Cross-posted from Lehigh Valley Regional News  Because of corruption in DE govt al la Townsend, Osienski et al, this hope has been forever dashed in the entire Ogletown S. Newark region. But at least Allentown PA gets it where the value of parks and trail systems are concerned.

ALLENTOWN, Pa. – An obscure tract of Allentown land may help boost the city's environment and economy. 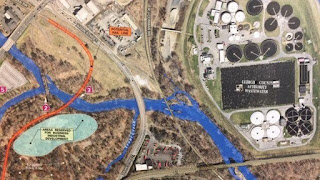 Plans were unveiled Thursday at Allentown City Hall for Auburn Cross Trails Park, covering about 32 acres of land bounded by Martin Luther King Jr. Drive, Basin Street and Auburn Street. About two-thirds of the of land is owned by the Allentown Economic Development Corp. and would be used for manufacturing.

The proposal includes trails, open meadows, picnic areas, a dog park and places to fish. The big picture is to move toward connecting to existing trails in the city and the region. The site used to house Allentown's municipal incinerator, which closed decades ago.

"The plan can be broken up into manageable pieces," Chris Stanford of engineering firm Michael Baker International said.

That may be necessary, because the $1 million-plus needed for the park is not available yet, according to Karen El-Chaar, director of Allentown's parks and recreation department.

"This will probably be state-funded," she said, with the city contributing a small amount. [Full Article]
Posted by Frank Warnock at 8:47 AM