According to officials at the NCC Dept of Land Use (DLU), the Chestnut Hill "Preserve" will see much, if not most of its runoff channeled to Leathermans Run, a tributary of the Christina River. The final stretch of Leathermans is on the State's FEMA map as a type "A" flood hazard. What this means for adjacent residents (i.e. Woodshade to the southeast, close to where Senator Townsend lives) isn't clear, but it can't be positive. 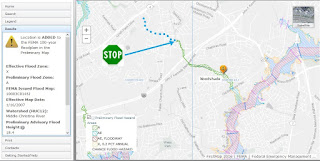 Will the green hash marks of the flood plain need to be redrawn, possibly overlapping property lines? Even without the Orphanage Property paved over, Todd Estates and Breezewood residents were used to seeing the grasslands and woods fill with standing water. It was a very low land and has a high water table -- before the development raised it. This water and more will now be heading to the Christina via Leathermans Run or will simply "absorb into the ground", according to officials and developers.

With Senator Townsend's refusal to champion the preservation of the Orphanage Property as State and/or County parkland, he blew off any notion that flooding could be an issue. Apparently, he relies on the "miracle" of civil engineering to tame the natural environment no matter what the challenge.

We are at the dawn of the Anthropocene, runaway climate change, and what should be a biodiversity emergency of epic proportions, yet Senator Townsend (and his fellow Democrat legislators) would rather condemn future generations and follow the money trail. He aids and abets developers in habitat destruction, forest clear cutting, and the paving of wetlands, or he would have fought to save the Orphanage Property.

Posted by Frank Warnock at 6:58 PM