Originally posted in Delaware State News, May 21, 2017 | Rep. Ed Osienski and Sen. Bryan Townsend have introduced a bill (HB 190) that guts the Coastal Zone Act by re-industrializing some of Delaware’s most contaminated land and allowing new bulk product transfer operations where they never previously existed. 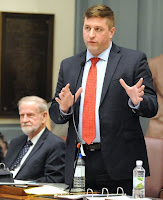 Established in 1971 under Republican Gov. Russell Peterson, the Coastal Zone Act has controlled the location, extent and type of industrial development in Delaware’s coastal areas to protect the natural environment for recreation and tourism. Manufacturing is allowed in the Coastal Zone (with a permit), but new heavy industrial development and bulk product transfer facilities were prohibited.

If passed, the bill would allow new heavy industry and bulk product transfer in targeted areas. Heavy industry, and its associated air and water pollution, is the most harmful and dangerous form of development. The areas that would be opened to new heavy industry including those near homes, schools and critical habitat zones.


As expected, HB-190 was signed into law by Democrat Governor John Carney.
Posted by Frank Warnock at 2:25 PM