The folly of Bryan Townsend, in one letter 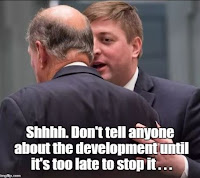 As Senator Townsend (along with cohorts Rep Osienski and NCC's Diller) goes around telling everyone that the loss of the Orphanage Property wasn't his fault, and that he exhausted everything in his effort to save it, nothing could be farther from the truth. It is very important to keep this at the forefront, given Mr Townsend's gross talent as a politician, liar and con-artist.

Nothing can change the fact that Senator Townsend knew years in advance that the Felician Sisters were looking to build, yet he NEVER brought this to the public and Advocate's attention. Each time someone would confront him with this fact, his go-to answers were "we didn't think it would happen" or "we didn't think the Sisters could get a plan approved" or "we did mention it at local civic meetings" (meetings that virtually nobody attends). 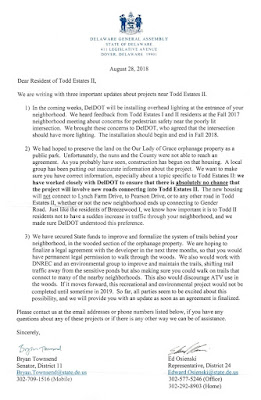 FACT: Mr Townsend knew of the threat of development in 2013, well before the plans were drawn up and the regional park alternative was FAR more achievable. He should have immediately recognized the invaluable opportunity before him, to do something great for his district and his constituents. He should have realized Ogletown-S. Newark (i.e. Route 4 corridor) was in need of its own regional park, instead of having to drive 20 min to Glasgow and Pike Creek. HE didn't do that, he didn't see the need for this invaluable open space as a public asset, because that would fly in the face of his donor interests in the building industry.

FACT: Townsend-Osienski DID write this formal letter (image right) to their constituents in Aug of 2018, regarding a "trail opportunity" in what remains of the Orphanage Property woods. No letter was sent in  2013 regarding a potential Regional Park opportunity, that one or both legislators could have easily championed. As it turned out, the "trail "opportunity" ended in failure due to private property, maintenance and liability issues -- and probably future development potential, i.e. Chestnut Hill "Preserve" Phase 2.

Despite such widespread and enthusiastic support for a regional park, no amount of action or visibility on the part of residents and citizens counted toward democracy in Townsend's District 11. And in light of such blatant corruption, neither did the rule of law. It became painfully clear that, from the very beginning, the fate of the Orphanage Property was already sealed. By the time Advocates and the broader public were notified in July 2015, it had advanced to a stage that nobody could stop it.

Posted by Frank Warnock at 4:31 PM