Legislator Was a Champion of Parks (in CA, that is) 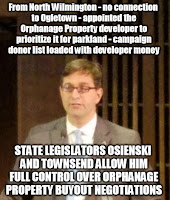 We have repeated on numerous occasions, and in articles on this website, that both State Legislators (including Rep Ed Osienski) are most at fault for the loss of the Orphanage Property, because they are self-serving and corrupt.

Unlike other States, most of Delaware does not have local jurisdiction; Ogletown-S. Newark is not a city, a township or a borough. We do not have the ability to draft and put up referendums on the ballot, i.e. open space funding via a minuscule sin tax as commonly seen in most other States. This is something that, like 10-9 funding (failed) and Open Space as a Democrat Party Plank (failed - again), Advocates would have worked very hard to secure funding. Therefore, our County and State Legislators are given a significantly elevated responsibility to act in the people's -- their constituents -- best interests, throughout the districts they serve. 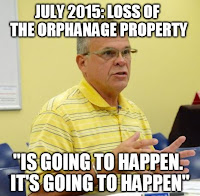 Advocates for Saving The Orphanage Property (STOP) knew from very early on that Councilwoman Lisa Diller was done and finished helping STOP Advocates; she made no effort to hide that fact and was a colossal failure when the cover was blown in 2015. Exec Meyer arrived late on the scene with his election victory in 2016, and with no State Legislator oversight, both State Legislators allowed him to throw away this one time-only opportunity with two hands.

Along with Diller, both Rep Ed Osienski and Sen Bryan Townsend knew back in 2013 that the property was in the early stages of development planning, and did NOT act in the manner of trying to save it for a regional park -- or because it made ecological and socio-economic sense. By 2015, plans for the Chestnut Hill so-called "Preserve" had advanced to the point that no advocacy effort could save it, and both Townsend and Osienski knew that, with Osienski reaffirming as much, repeatedly, throughout the campaign.

This, in stark contrast to another Legislator from California, who fills the same shoes as Townsend-Osienski in Delaware, yet was a champion of parks for his constituents and the State as a whole. Excerpts:

John P. Quimby, the plain-spoken former assemblyman who authored California’s law that lets cities and counties require developers to set aside land for parks, has died, according to the Los Angeles Times. He was 77.

The Times reported that Quimby died Dec. 23 of pneumonia at a Sacramento-area hospital. Quimby contracted polio when he was 12, a disease that required him to use crutches or a wheel chair in later years. When he was 22, he was elected to the San Bernardino City Council, the youngest council member in the city’s history. He was elected to the Assembly in 1962 and served for 12 years.

After World War II, Southern California experienced an unprecedented building boom that left areas like North Orange County “park poor.” In 1965, the Democrat authored the law later named for him — the Quimby Act. [Full article ...]
Posted by Frank Warnock at 8:43 AM