For anyone searching under any word combination of "Bryan Townsend Osienski Corruption", they're in for a deluge of fact finding information. Ditto that with "Orphanage" or "Open Space" or "Ogletown". Those with inquiring minds -- and there will be many come future generations -- will swiftly learn of this pair's folly, and just how corrupt they really are. Admins for this page, and Ogletown Resilience, and 1st State Bikes, have also ensured that these domain names will remain permanent and on-line for the foreseeable future (what's left of it): 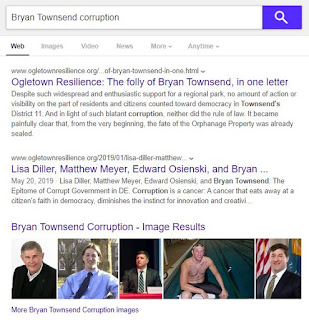 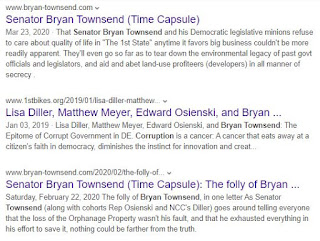 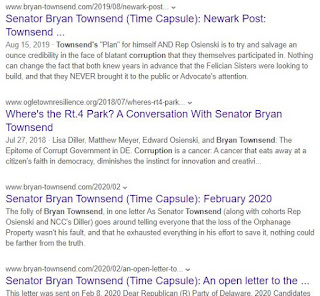 The goal of this page is make Sen Bryan Townsend's corruption readily searchable by the public, so that future generations will know who sold them out environmentally and socio-economically. That they will know who denied them "Naturehood", and ignored and thus hastened the climate and extinction crisis we now face. That this legislative cabal in the "Democratic" party never even tried, yet they continue lying that they did with a fake line item in the bond bill. That they threw away the last remaining open space, with an interconnecting trail system and habitat area suitable for a regional park -- even at the cost of a pittance.

Mr Townsend and his House minion Ed Osienski deny any role in the loss of the Orphanage Property, and insist that they were powerless to stop it. Nothing could be farther from the truth. As one of the highest ranking State Senators and a future anointee for Governor or a seat in U.S. Congress, Townsend alone could have led the charge to save it. He could have intervened a full 2 years before Advocates were even made aware of the development plans, and demanded a different outcome -- that the land be saved as a regional park. He could have been a champion, like other State Legislators around the country are for their constituents. Instead, he trashed - forever - the needs of thousands living in the Ogletown-S. Newark region, in favor of profiteering and kickbacks to his campaign donors in the building industry. He allowed this to happen knowing full well that the region has a terrible history of disenfranchisement, because he didn't need them to win re-election in 2018. 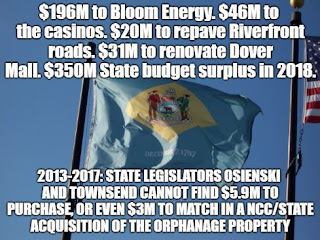 Posted by Frank Warnock at 5:41 PM